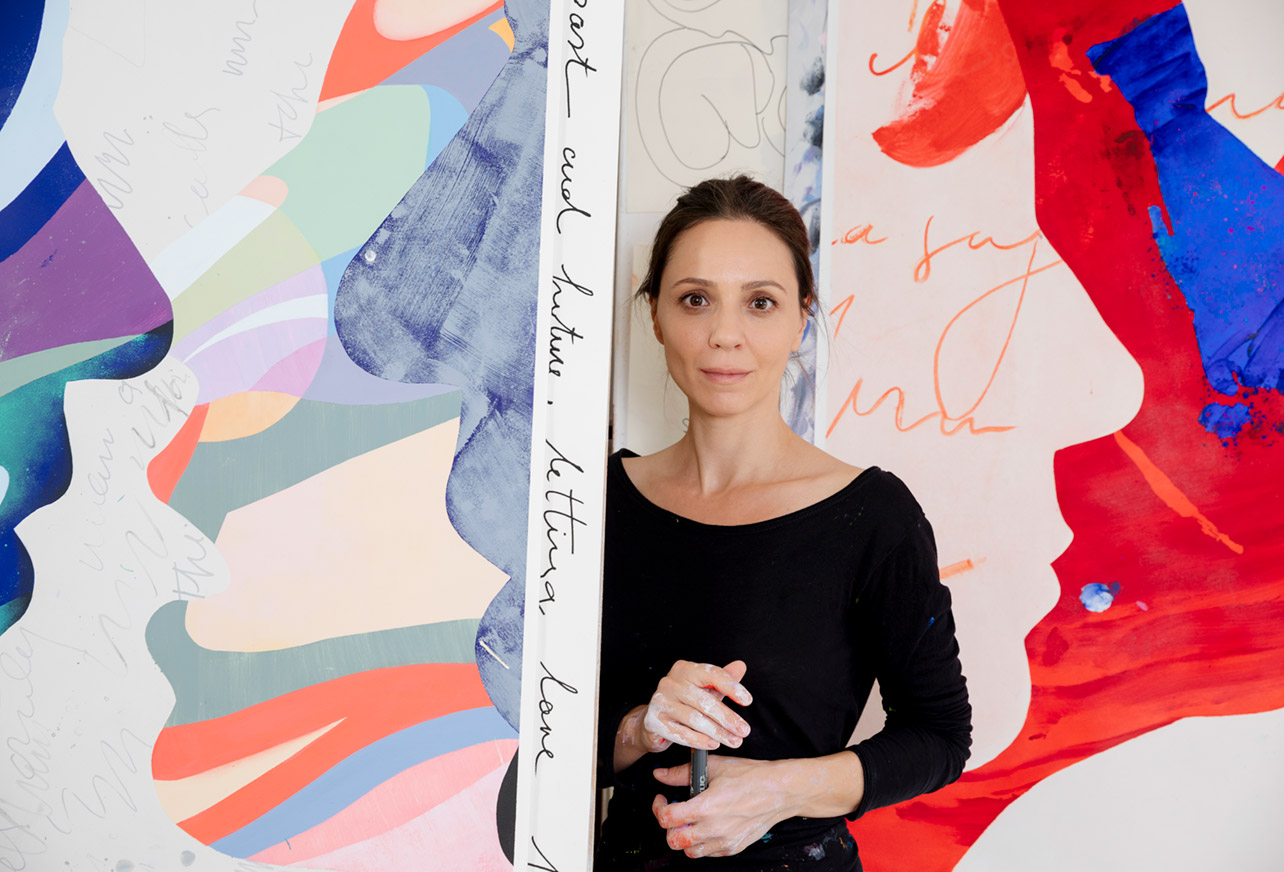 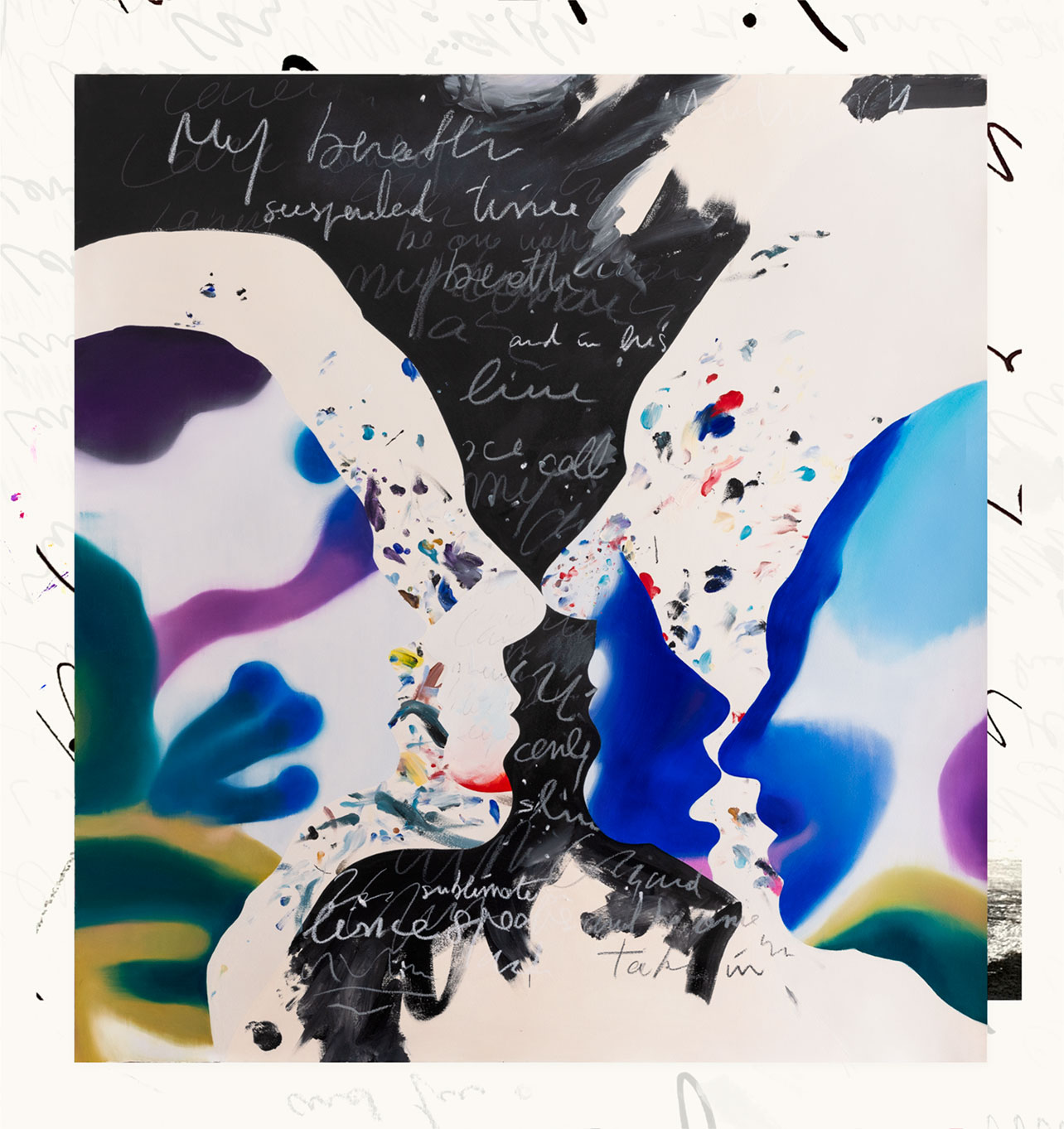 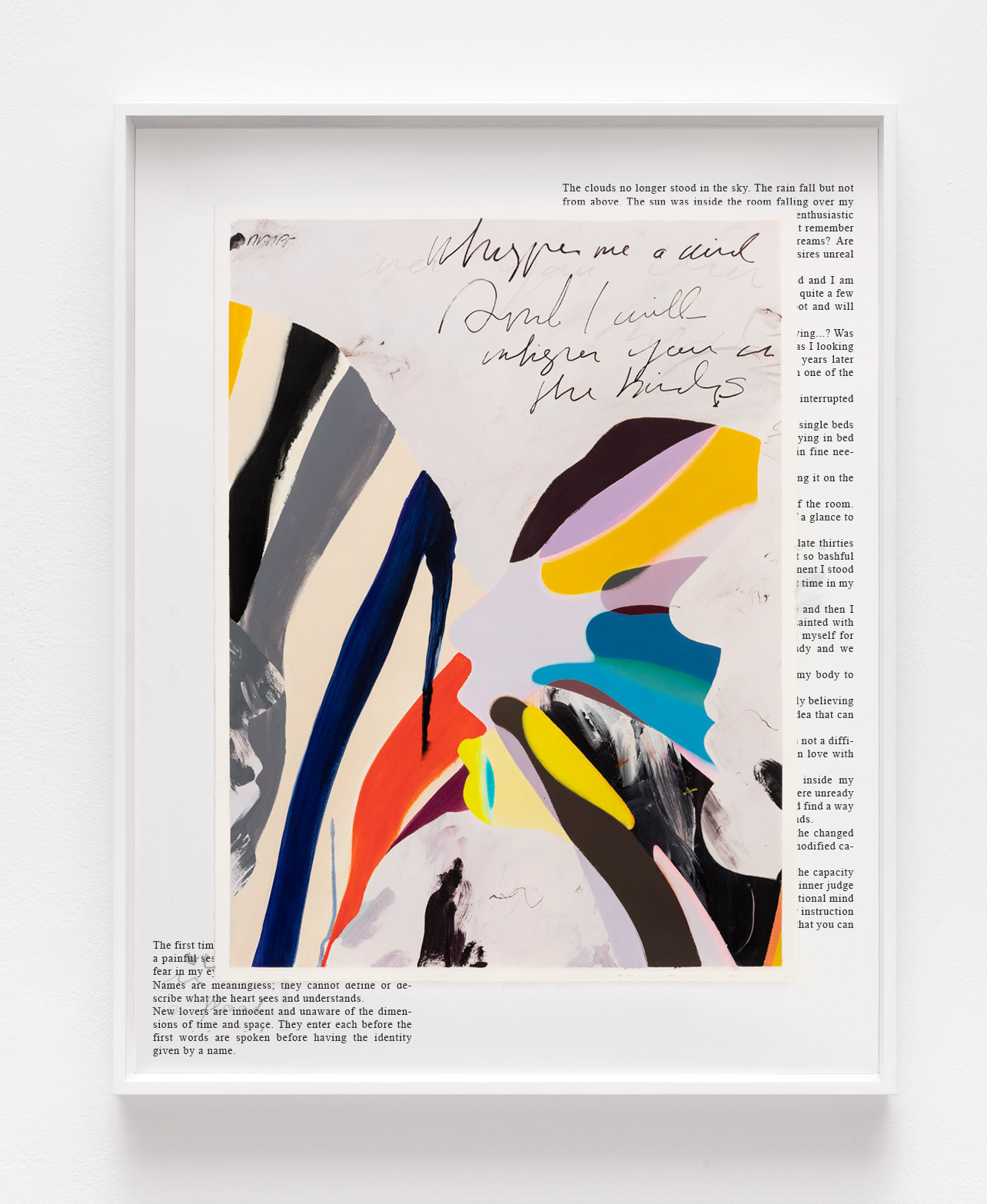 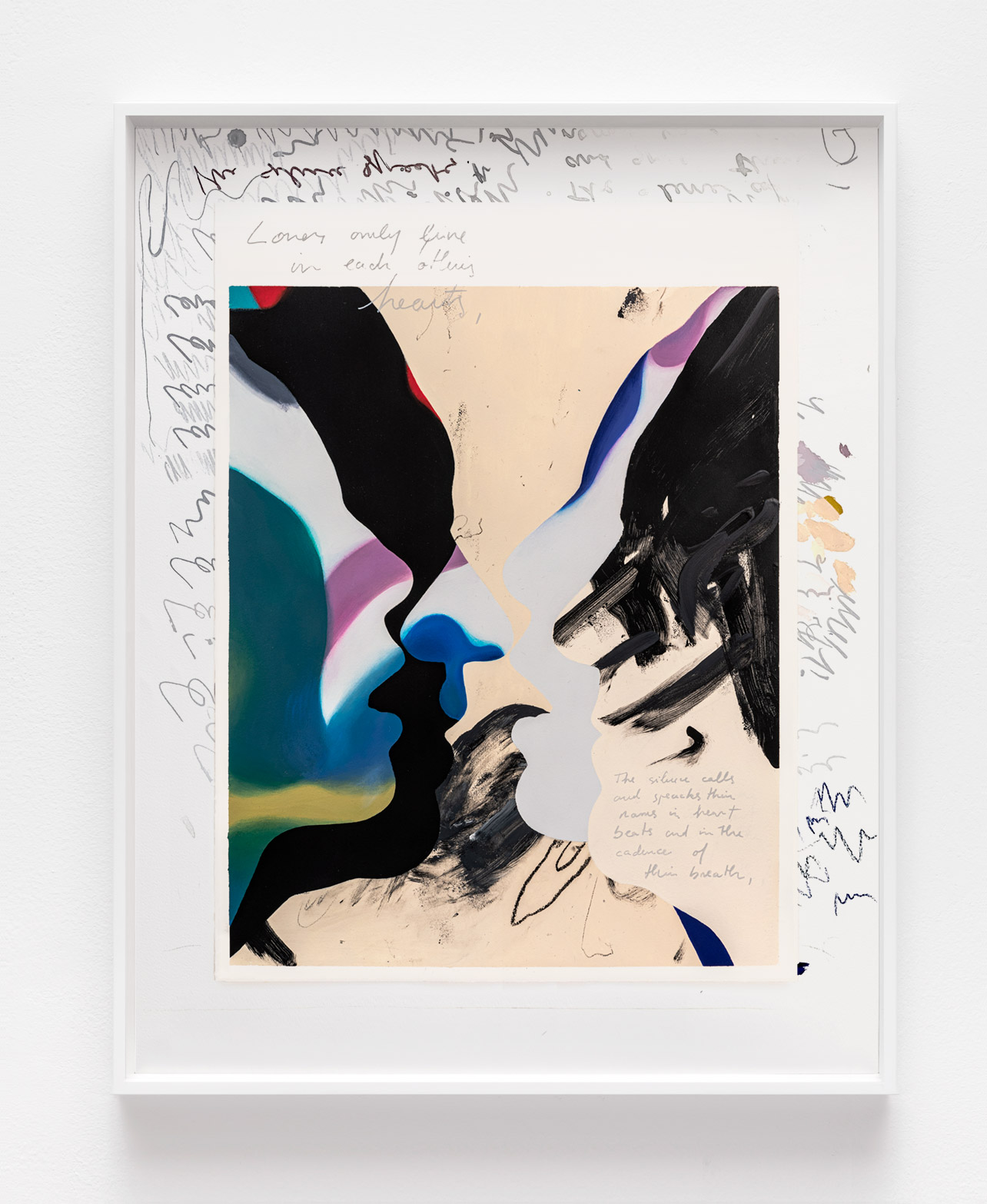 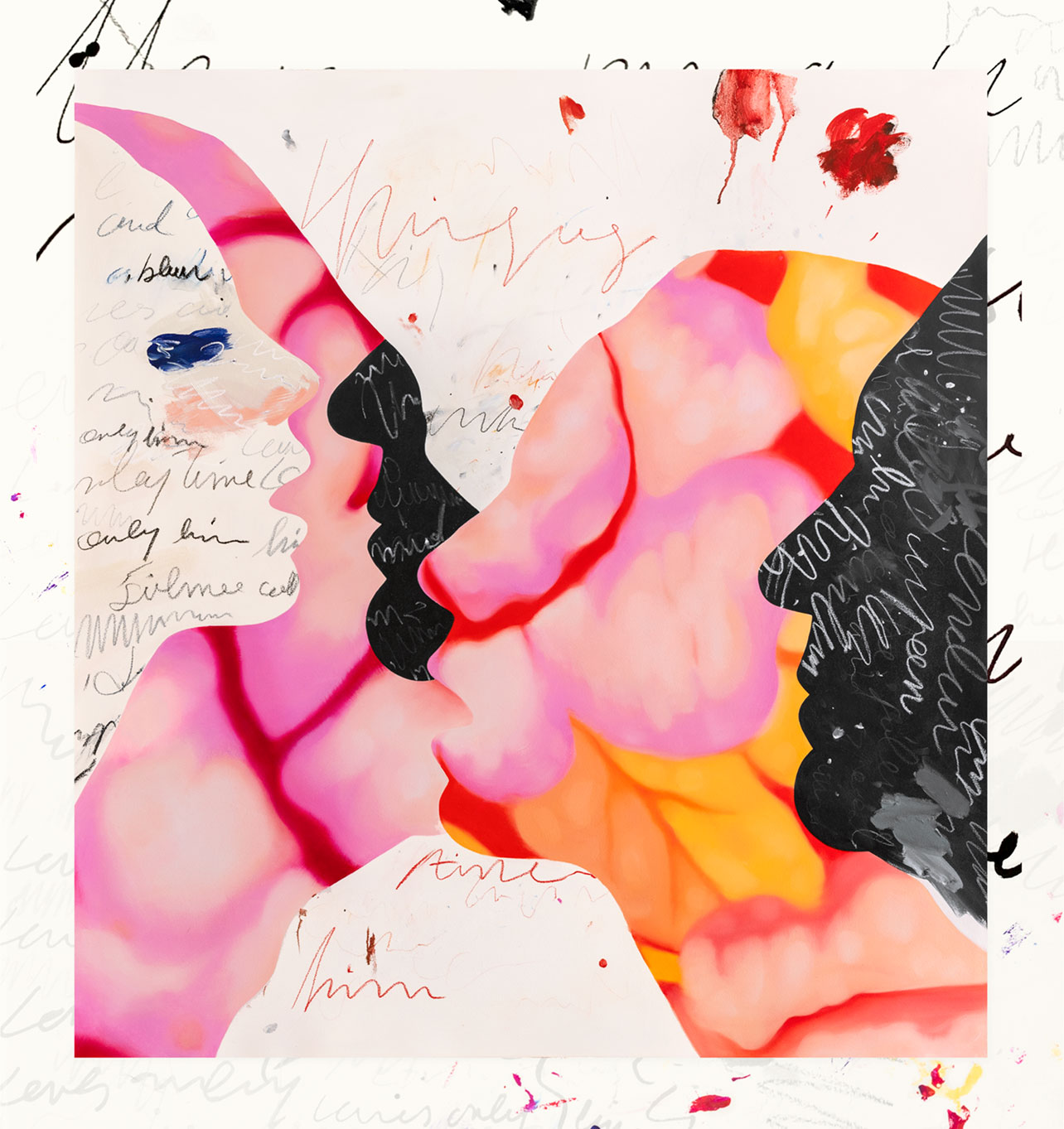 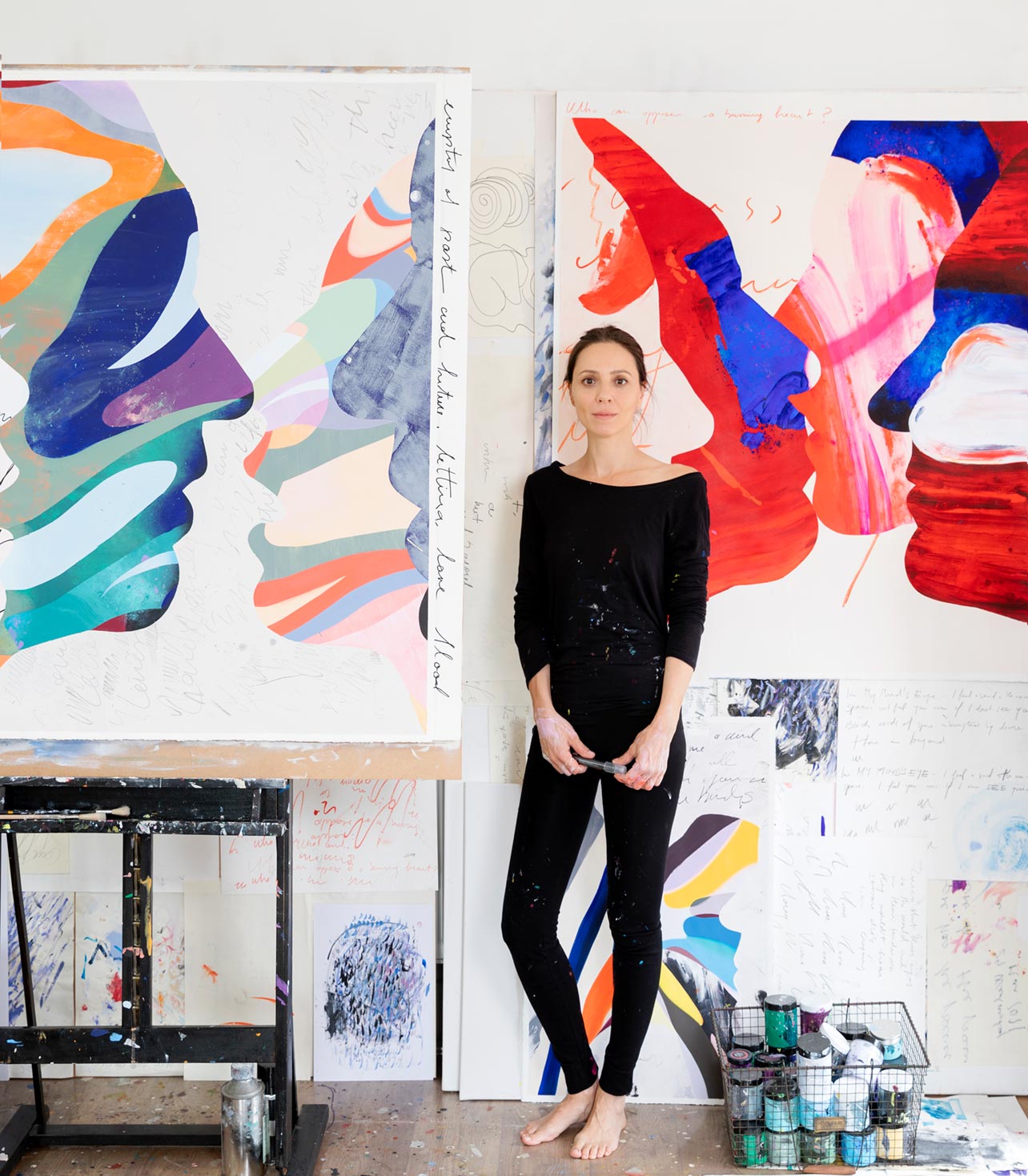 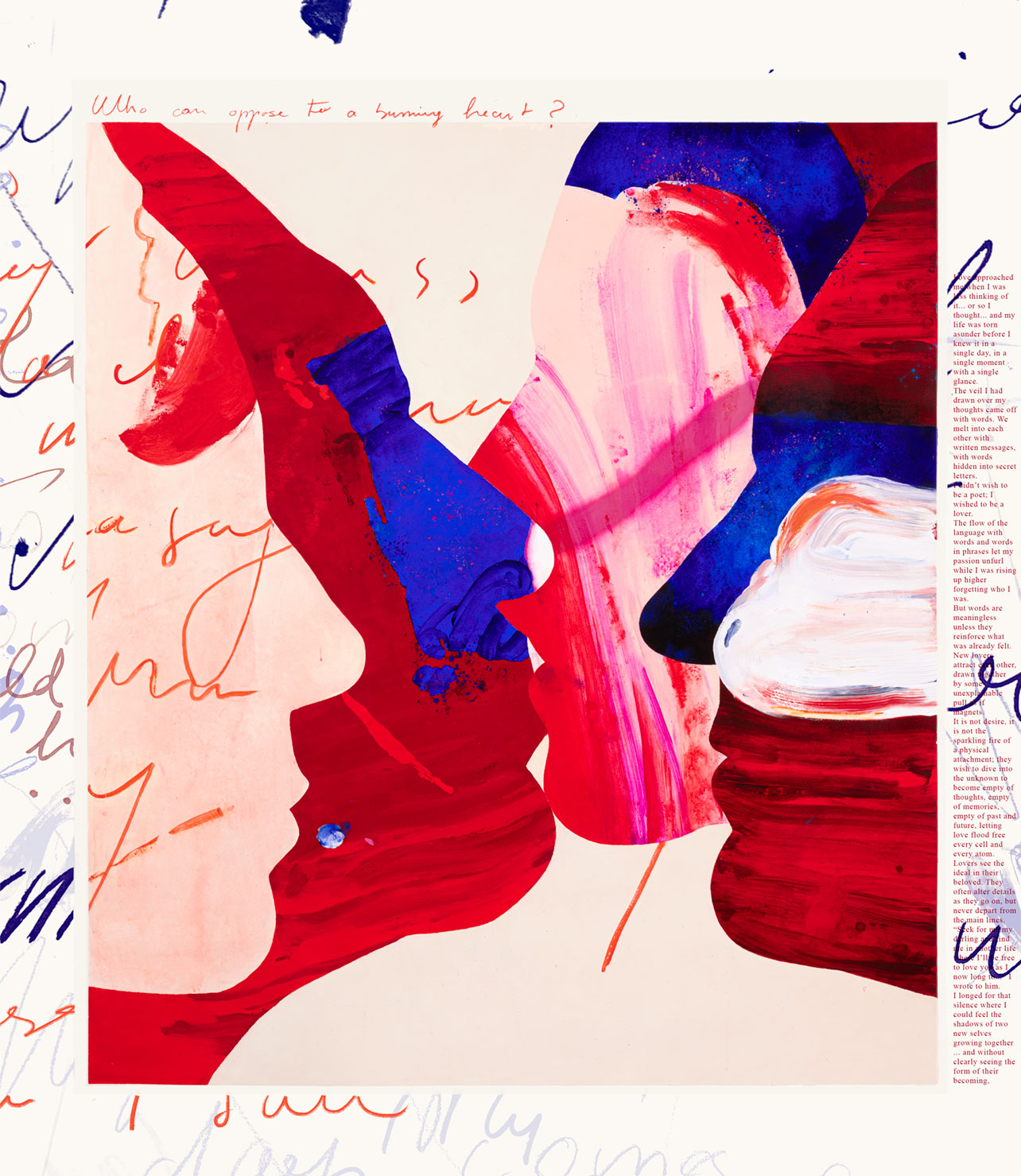 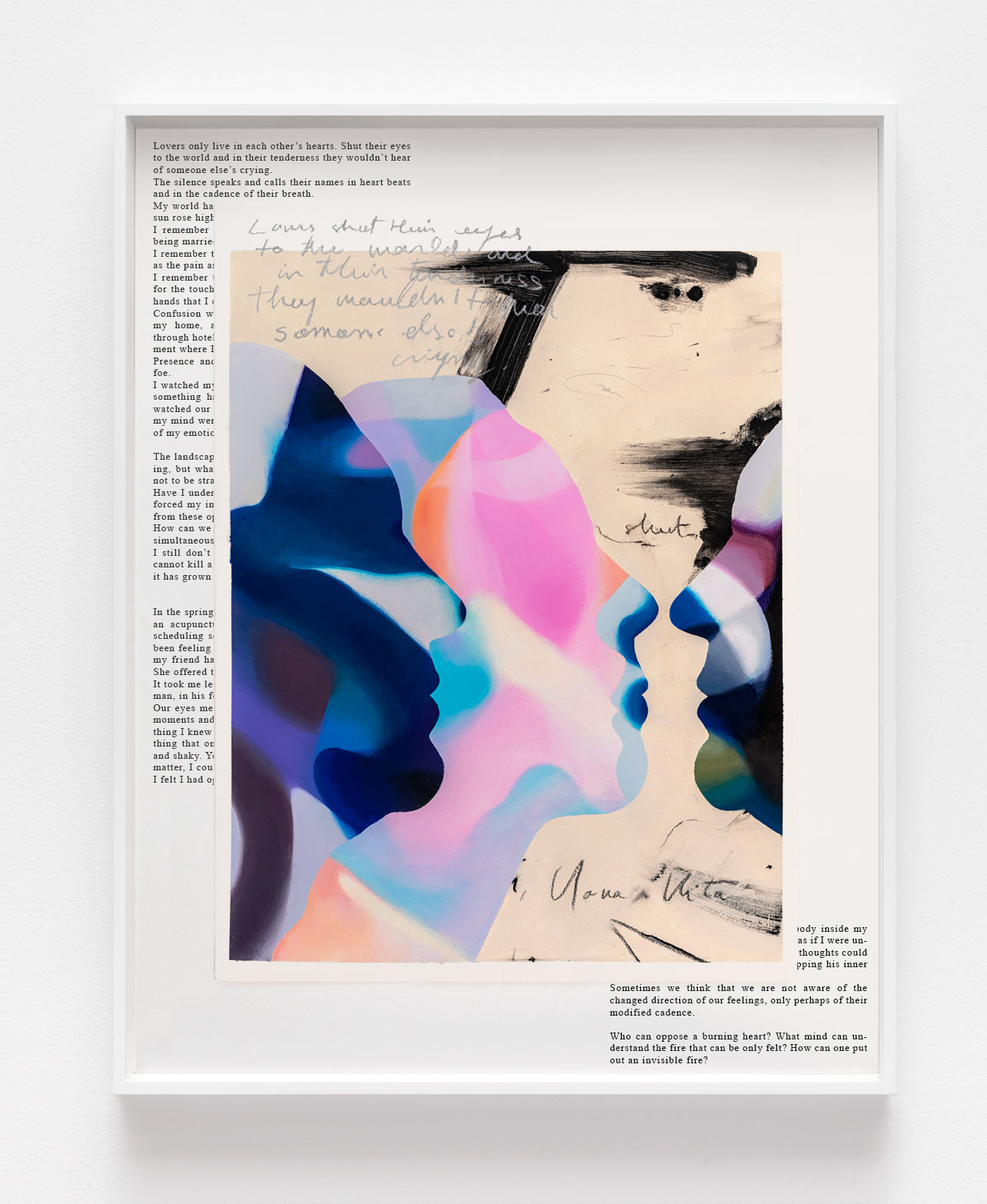 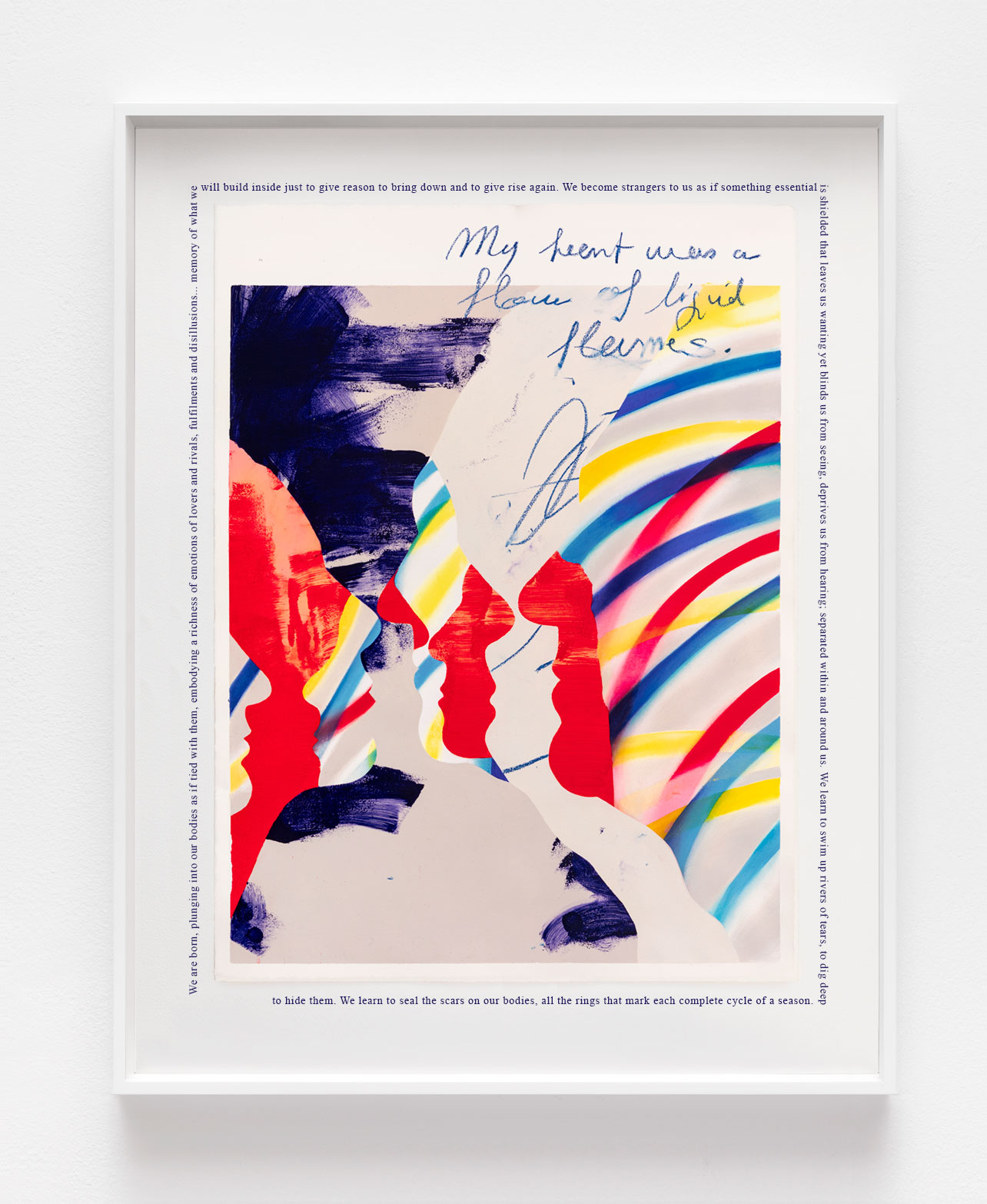 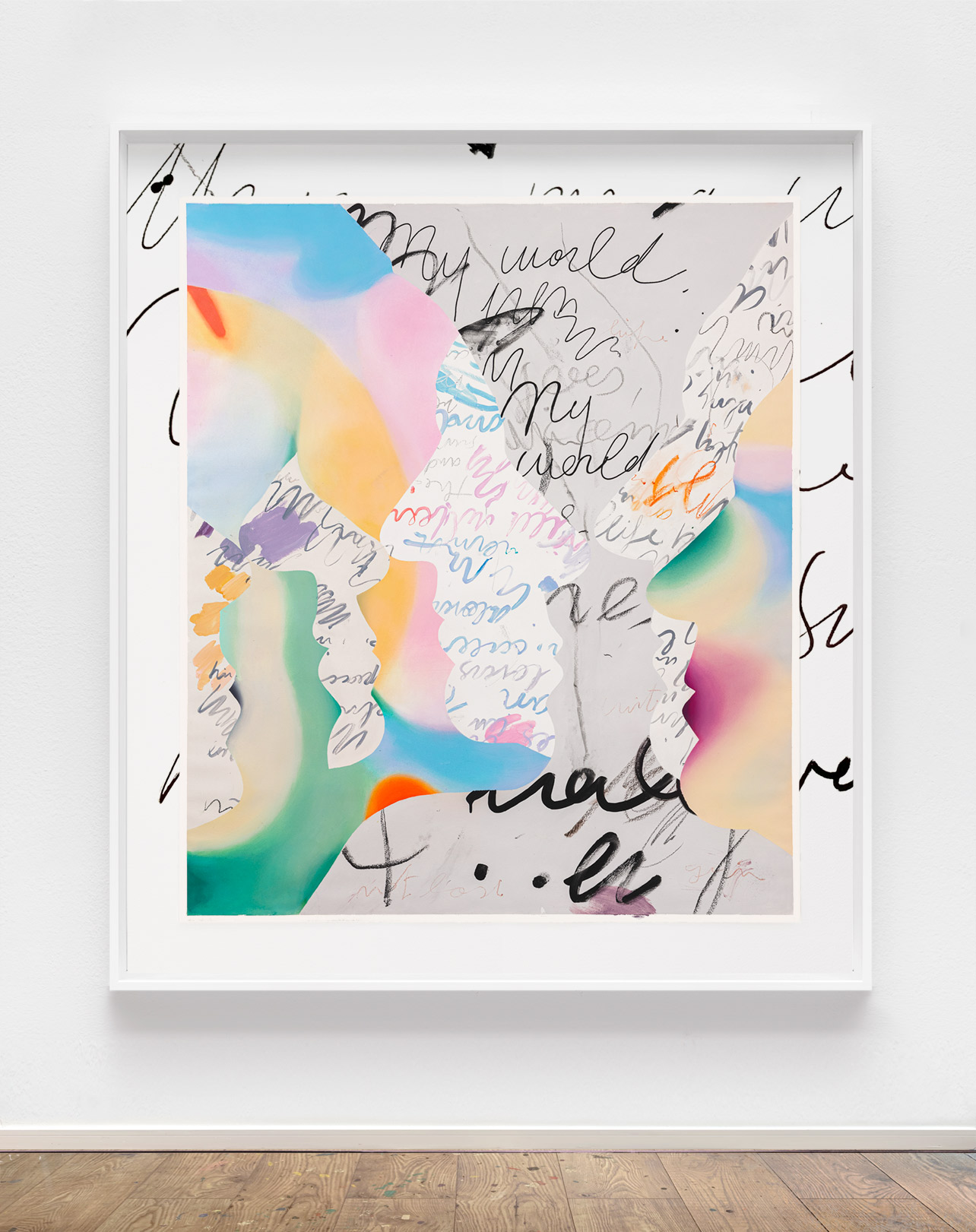 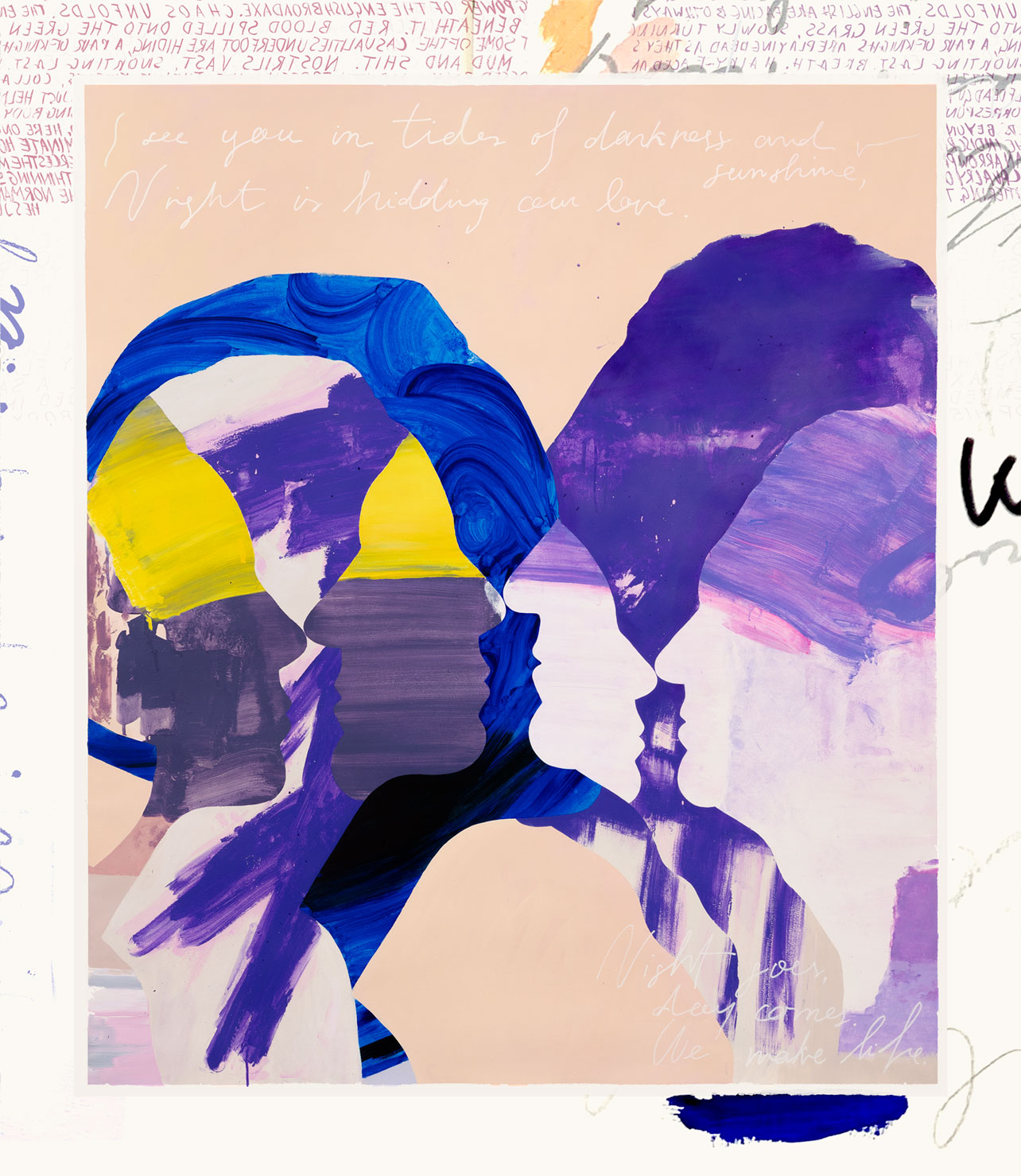 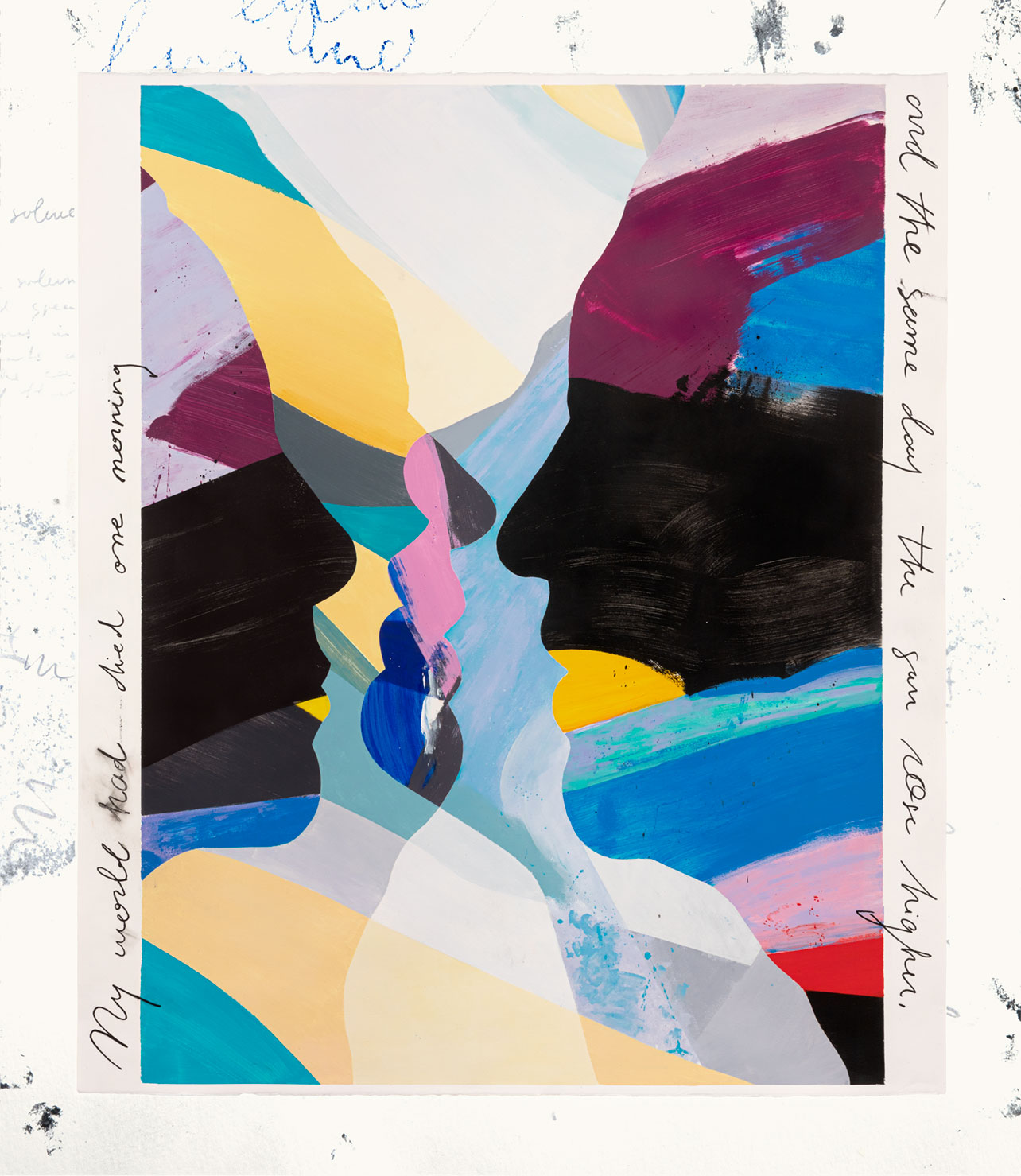 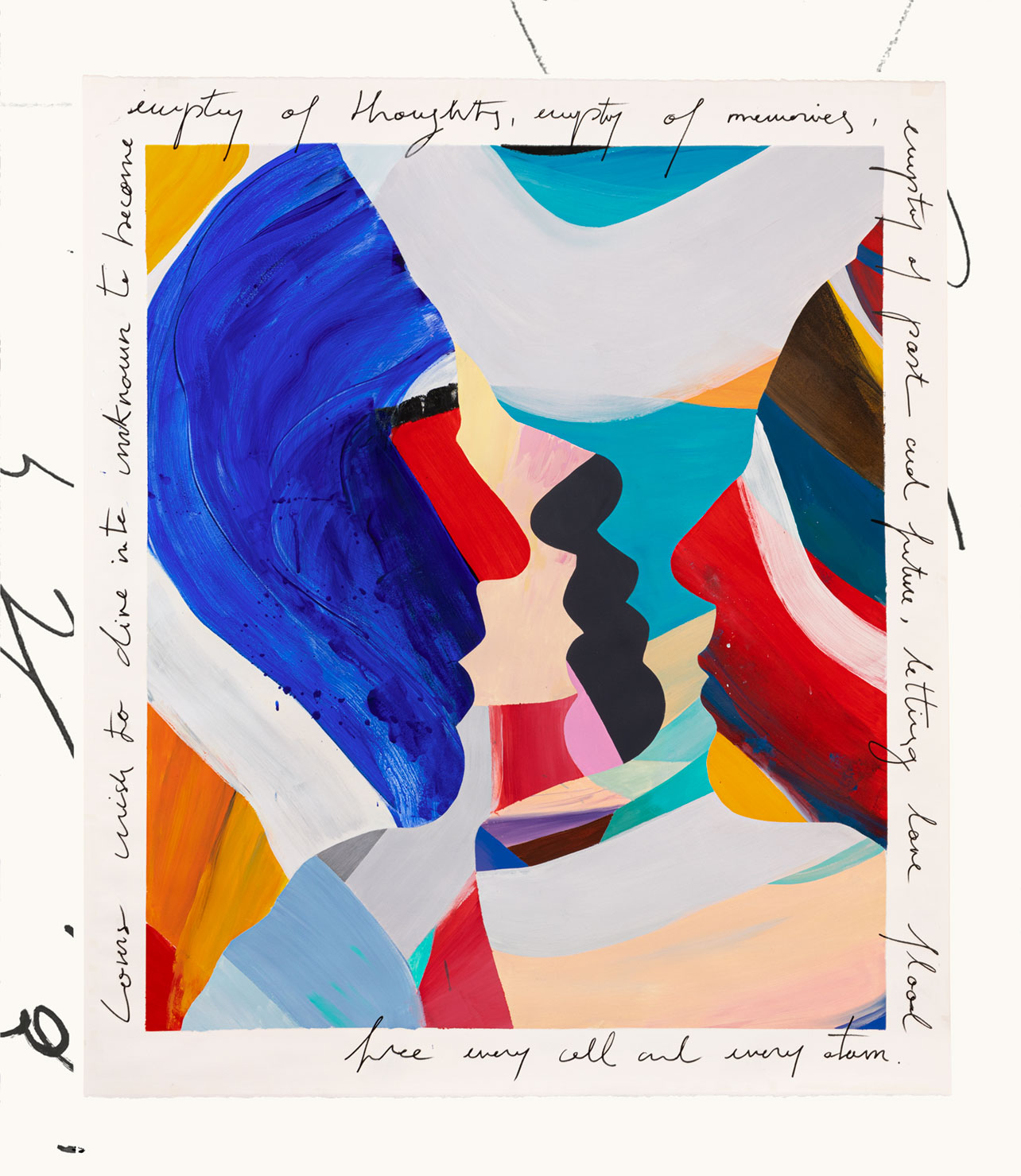 
Anca's series 'Novus Amor, Novis Vita' (New Love, New Life) was created in 2021 and is intimately connected with her life. Anca was married at the time she met Cristian, to a Romanian artist, Cristian was recently divorced. Even before she met him, Anca and her husband already had a stormy relationship after eighteen years of marriage. Being in a tumultuous co-dependent relationship Anca kept hidden her feelings dreading her husband's suicidal threats. The series contains fragments from the love letters she secretly had been writing to Cristian until she reached a maximum of despair not being able to end neither marriage nor affair. She painted love and the violence of an absolute emotion keeping only the contours of their faces and the words or full passages from their correspondence.

Love turns colour
The characters I've painted, the faceless figures, I wished for them to live and move in an independent world, whether I watch them or not, to exist outside of my narrative, of what I explicitly create or understand. This is why I wiped out the physical traits that would form a certain figure even when I used my face as a starting point. I wanted to build characters that create beyond the author - more akin to Austin or Tolstoy in their novels - outside the narrowness of my own personality or vision. And I say narrowness in terms of intensity of focus on the power of my own persona, my experiences and my beliefs. I am not attempting to solve the problems of mankind, the structures and the dynamics of human life expressed through maximal emotions: I love, I suffer. That has to do with living, or with the essence of humanity and the complexity and the contrast of feelings. But beneath all the emotions, what is there? As a starting point, my own life is my stimulus because of its tangledness. I prioritise the expression of the self but do not follow an “egotistical sublime” vision, a kind of High Romanticism that promotes the ego to the sublime. I look outwards at external emotions, I look in the round, on many different people that are complex by means of their effect upon me. It is not my intention to create an overwhelming public assertion of my identity nor to force someone along my road, to make them see what I see or feel. I wish for the public to forget me and the artworks to serve to mirror their own feelings that diverged from their personal world views, their thoughts and beliefs not mine. [...] Lovers only live in each other’s hearts. Shut their eyes to the world and in their tenderness, they wouldn’t hear of someone else’s crying. The silence speaks and calls their names in heartbeats and in the cadence of their breath. My world had died one morning and the same day the sun rose higher. I remember falling in love with Cristian while still being married. I remember the lies and the truth of my words as well as the pain and the sorrow. I remember the remorse and the oblivion.... yearning for the touch of my lover while wishing to escape the hands that I once loved more than the world itself. Confusion were the clouds passing by the window of my home, abandon were the same clouds viewed through hotel rooms and later on the single room apartment where I was secretly meeting up with my lover. Presence and absence... wife and lover... friend and foe. I watched my husband mourning me as if I’d died and something had, the couple we had created jointly. I watched our love become estranged while the walls of my mind were running down shattered by the violence of my emotion. The landscape of human emotions is constantly changing, but what I desire, more than sunny weather, is not to be a stranger, at least not to myself. Have I understood life around me better? Have I reinforced my insight from love and from estrangement... from these opposed feelings? How can we live with love and in the absence of love simultaneously? I still don’t know... but what I do know is that you cannot kill a sentiment as you cannot kill an idea once it has grown sprouts into your mind.’

I wished to be a lover
In the beginning, was the Word, and the Word was with Us, and the Word was Us. Love approached me when I was less thinking of it... or so I thought... and my life was torn asunder before I knew it in a single day, in a single moment with a single glance. The veil I had drawn over my thoughts came off with words. We melt into each other with written messages, with words hidden into secret letters. I didn’t wish to be a poet; I wished to be a lover. The flow of the language with words and words in phrases let my passion unfurl while I was rising up higher forgetting who I was. But words are meaningless unless they reinforce what was already felt. Love wants to join love like water wants to join the water. New lovers attract each other, drawn together by some unexplainable pull as if magnets. It is not the desire, it is not the sparkling fire of a physical attachment; they wish to dive into the unknown to become empty of thoughts, empty of memories, empty of past and future, letting love flood-free every cell and every atom. Lovers see the ideal in their beloved. They often alter details as they go on, but never depart from the main lines. “Seek for me my darling and find me in another life where I’ll be free to love you as I now long to...” I wrote to him. From where is the feeling, when married, that we are not at liberty to give the love we feel as if we were not belonging anymore to ourselves? It took me many words to crack asunder restrictions that wrinkle and contract, beliefs of moral code or responsibility and commitment... It took me many phrases in order to undo the error of believing I was not free to love, the error of believing that I was still the one that decided to marry in her twenties. I never wished to be a wife; I wished to be a lover. The more time I spent with my feelings the more they grew, extending stems or branches, enclosed within my heart... and my heart was dispersing words like seeds... gliding or spinning through the air, shaped to float as letters. Love letters... to whom addressed? To my lover? To myself? What was I seeking out that was not any longer inside the woman who was living side by side with the man once friend and husband? When do we cease to be lovers in our marriages? If I were to observe my words I would have known. Some words were missing, some were seldom used as if I was becoming a stranger to my own language. I was tired of missing words. Tired of unarticulated broken feelings. Tired of confusion. I was yearning for the beginning of the story, the moment when there are just a few lines drawn upon white sheets of paper. That moment, when we are learning words, inventing language... I longed for that silence where I could feel the shadows of two new selves growing together ... and without clearly seeing the form of their becoming, knowing they were growing into one.’

Symbol and form
The symbols I use do not always make sense to me. Dreams and visions are summed up to complete; the hand runs from one line to another while time collapses while the reasoning mind falls into silence. The visions exist most completely in solitude. They press their shapes upon my mind and I just need to get them out. They resent examination, at first so spontaneous, or any thoughts that could deny their potential for they are symbols of inner reality, subjective openings connecting my familiar self with the soul. Where understanding seems to elude me or escape me I stretch and I plunge into the inwards of my emotions. Sometimes I paint as if the paint were urged out of me by the pressure of the time. Sometimes I fear every gesture as if I were setting up psychological and psychic barriers to explore more. At first, they seem erected to protect me from the unknown dangers of what seems to be the unconscious mind. I am for a while drifting in the apparent meaningless of my gestures. But images, words or thoughts, are all connected one way or another. A picture in imagination, just like a thought, once formed leaves the conscious mind as if it would disappear. Somehow I fear to follow it, to go after something that is no longer in the three-dimensional landscape. I change focus towards the reality I identify myself with but when I paint I simply realise that my own reality bends, continues in another direction and all the images seen on the mind screen, the thoughts or emotions that have left my conscious mind will conduct me into other environments, back to the dreams, back to that very point from where the initial experience emerged. The consciousness is not immobile, constricted or enclosed in the bone framework and it is the consciousness that forms or acts in symbols. Paintings are methods of expression just as the words are. I do not consciously know how I manipulate loads of symbols. I don’t know how I think or how I pick a precise symbol to express a given thought. All the confusion starts when one believes that one’s own symbols may be translated by someone else. Just like in the case of a painting or any art object. The marks upon the surface have the reality only of paint and canvas, just like the letters upon the paper. What they carry is invisible to the eye. They are information conveyors. Sometimes I wonder if it is detrimental or not for the public to have known the artist’s discourse regarding his creation since even if it is a valid point of view it is a single point of view. Sometimes minds must be divested of many impeding ideas and symbols, so that the symbols that lie in front may carry consciousness into personal explorations. Without any different interpretation or symbols translated in dissimilar or divergent ways, the creation for me remains an isolated event that cannot grow and transform and further create through the viewer. Consciousness forms symbols, but consciousness also creates form. One should better wonder why events brought him precisely in front of a particular image such as a painting being aware that all that he perceives is equally the consequence of his own creation. How do one's ideas appear within the matter? Matter can be manipulated to materialise. But the one that manipulates matter into physical existence is not more of a creator than the one that meets the same idea already formed in front of his eyes.’
Notes on ‘Novus Amor, Novis Vita’ / 2021